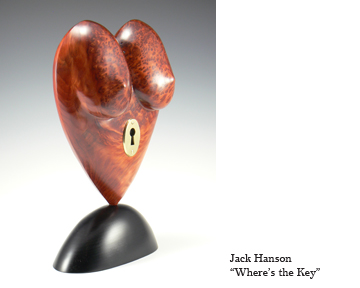 Jack Hanson was an aerospace physicist for thirty years and woodturning was his hobby for almost as long. Since his retirement in 2000, he has a more active craftsperson and has included woodcarving. His training has been mainly woodturning symposia and personal experimentation. Jack has been a juried member of the Pennsylvania Guild of Craftsmen for about 30 years. He primarily sells his work at local art shows. He has had turnings included in Fine Woodworking magazine and the American Woodturner Journal.